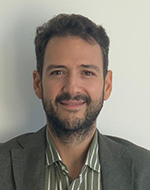 Mr. Radu Pop is Head of Sales for Infrastructure and Frontier Security with  Airbus Defence And Space.

He is a graduate of the Romanian National Defence College and holds a Master’s Degree in European Law from The Romanian American University in Bucharest.

Since 2011 Radu Pop has worked as Sales Director at Airbus Defence and Space managing business development and sales campaigns in the area of infrastructure protection and and border security.

From 2005 until 2011 Mr. Pop served as a senior official at the Romanian Ministry of Interior. Amongst his responsibilities Mr Pop led the Schengen Evaluation Process for Romania and headed the Romanian delegation in several EU working groups in Brussels in the fields of migration, asylum, homeland security and borders.  During the period 2003 – 2004 Mr. Pop was part of the negotiation team for Romania’s accession to the European Union.

Mr Pop is a specialist in the field of homeland and border security and has been a frequent speaker at conferences and educational institutions throughout his career.