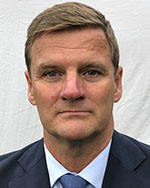 Mr Nilsson (1963) is a Police Commissioner, Project Manager and Head of Airpol. Airpol is the European network, financed by the European Commission, for Airport Police and Border Guard organizations. Airpol works for a deeper collaboration between member states organizations as well as to raise the overall competence level by issuing handbooks and by giving training sessions in certain fields. Airpol works intensively to extend the cooperation to countries outside EU, in North Africa, Asia as well as North America.

Nilsson has a law degree from the University of Uppsala and a master degree in Sociology and Political Science from University of Leeds and University of Lund. He graduated at the Swedish Police College in 1991. After various positions both within and outside the police he was appointed Head of Border Police in Stockholm, Sweden, in 2005. He managed successfully this unit (485staff/30 M Euro) for ten years. Nilsson has a vast experience of airport security and airport policing since working with it for more than 15 years in an international context.

Nilsson was in 2016 awarded the International Police and Public Safety Medal by the 9/11 Award Committee at a ceremony in San Diego, US.

The same year he was awarded the PPA Cross, Medal of Merit by the Estonian Ministry of Interior for services made to Estonia and the Estonian Police.

Thanks to our Sponsors